Liquidity in Vietnam stock market is predicted to improve in 2020: FiinGroup

The Hanoitimes - Foreign indirect investment will continue to increase this year and the interest will shift gradually from the bond channel to the stock market.

The liquidity of Vietnam’s stock market in 2020 is predicted to improve, thanks to the capital inflow from foreign investors and attractive market valuation, according to a study from FiinGroup. 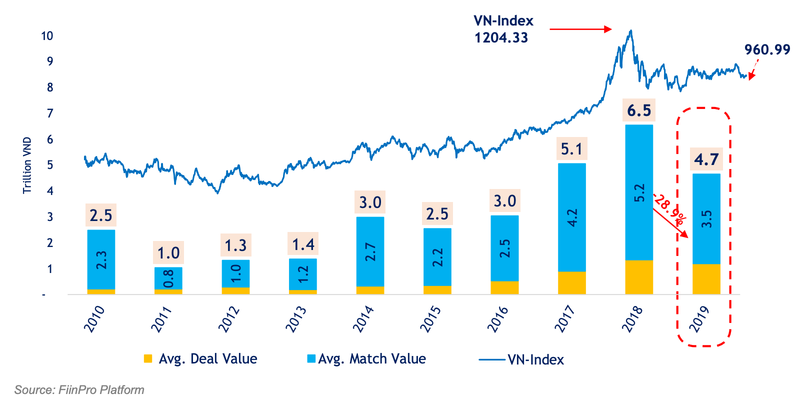 Regarding real estate investment channel, if excluding the price increase, the rental income from apartments was quite low, specifically 4.4%/year from luxury, 5.7% from mid-end and 5.9% from affordable segment, according to batdongsan.com. This level was lower than the average return from stock market in 2019.

Looking at longer horizon, the VN-Index increased by only 76% in the last 5 years and 94% in the past decade.

“In short, in 2019 and the past five years, the stock market was basically not an attractive investment channel, although many investors have enjoyed high returns, especially in 2018,” stated the report.

Moreover, there were no major IPO in 2019. The stock market had just few small IPOs which mobilized over VND600 billion (US$25.91 million), equivalent to 0.85% of the 2018 value and hitting the lowest level since 2013. IPOs of giant SOEs such as Mobifone, VNPT, Satra have not yet taken place as planned while there was no remarkable IPOs by private companies.

According to FiinGroup, the current market valuation is at the same level as when the VN-Index hovered around 700 in mid-2017 before a strong rebound, which is “the most positive factor for the market potential in 2020. However, the key points lies on the quality of corporate’s profit growth in the coming quarters to lure cash flow return.”

Additionally, exchange traded funds (ETFs) increased their assets in Vietnam by US$149.2mn (nearly VND3.5tn) in 2019, despite net outflows in global markets. ETF will likely continue to thrive in 2020, especially the upgrading story of Vietnam stock market can be realized in the coming year and thus attracting higher proportion of capital allocation by emerging market-focused funds when Vietnam reaches this status.

More importantly, the macroeconomic context and the exchange rate are considered very stable by independent domestic and foreign research organizations. FiinGroup expected FII will continue to increase this year and the interest will shift gradually from the bond channel to the stock market.